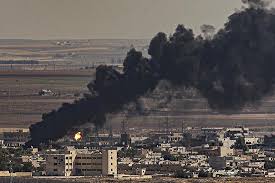 Having never voted for Washington's pointless, illegal and destructive fomenting of Syria's calamitous civil war in the first place, as the constitution requires, the bipartisan congressional mob actually had the gall to vote to keep US forces in the middle of a centuries old Kurd/Turk conflict that has zero implications – and we mean as in none, nichts and nada – for the security and safety of the American homeland.

The pretext, of course, is that the ISIS caliphate will come roaring back to life absent the armed resistance of the Kurdish-SDF forces positioned in Syria's northeast quadrant; and that with these bombed-out, impoverished, no-count towns, villages, farms and dusty plains back under the black flag of ISIS, next up will be IEDs in the New York City subways.

That's just blatant claptrap. If Syria becomes whole again, the Islamic State doesn't have a snowball's chance in the hot place of reviving. And letting Syria become whole again was exactly the purpose and consequence of Trump's courageous decision to remove American forces from the Syria/Turkey border.