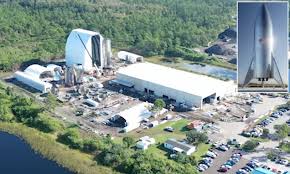 A birds-eye view of three of SpaceX's glimmering Starship spacecraft shows that the vessels are slowly but surely coming together.

As reported by CNBC, the video also shows the first stainless steel bands of another Starship prototype, the Mark 4, being assembled.

The progress gives credence to a claim from SpaceX CEO and Tesla founder, Elon Musk, who claimed that the next-generation craft will be ready for test flights between October and November.

An FCC filing surfaced in September that revealed SpaceX requested permission to fly Starship more than 12 miles into orbit and then land the craft back down in the same spot.

While SpaceX employee have been hard at work in Florida, a team in Texas has been concurrently building their own prototype.

The company is looking to build on a series of successful tests from Starhopper which most recently saw the craft hover more than 100 meters into the air and safely return to the launch platform.