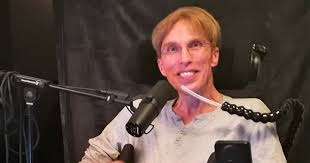 A scientist who is dying from a muscle wasting disease is taking drastic steps in his bid to become the world's first true cyborg.

Dr Peter Scott-Morgan, 61, from Torquay, Devon, was diagnosed with motor neurone disease two years ago and told it would only take until this year to kill him.

But instead of accepting his fate he decided to challenge what it meant to be human and now hopes to create Peter 2.0.

He is gradually replacing his bodily functions with machinery – an electric wheelchair now enables to him to be upright, sitting or laid down; he has banked his voice on a computer and had his voicebox removed; and is fed through a tube and has a catheter and colostomy bag attached so he doesn't eat or excrete.

The most recent phase of Dr Scott-Morgan's transformation has been to make a computer avatar of his face.

The avatar – a computer rendering of his face – is designed to be controlled with artificial intelligence and look like him before he became ill.

He has also rigged up various machines so he can control them with the movement of his eyes, among them a hoist and a motorised bed.