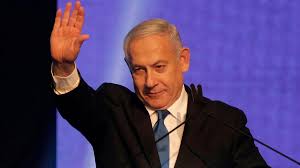 For most Israelis, the general election on Tuesday was about one thing and one thing only. Not the economy, nor the occupation, nor even corruption scandals. It was about Benjamin Netanyahu. Should he head yet another far-right government, or should his 10-year divisive rule come to an end?

Barring a last-minute upset as the final ballot papers are counted, Israelis have made their verdict clear: Netanyahu's time is up.

In April's inconclusive election, which led to this re-run, Netanyahu's Likud party tied with its main opponent in the Blue and White party, led by retired general Benny Gantz. This time Gantz appears to have nudged ahead, with 32 seats to Netanyahu's 31 in the 120-member parliament. Both parties fared worse than they did in April, when they each secured 35 seats.

But much more significantly, Netanyahu appears to have fallen short of the 61-seat majority he needs to form yet another far-right government comprising settler and religious parties.