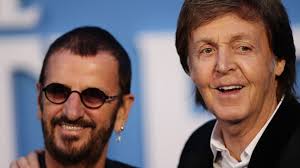 Lennon penned Grow Old With Me during the sessions for Double Fantasy, the final record he made before he was shot and killed outside his Manhattan apartment on December 8, 1980.

The former Beatles drummer, 79, was introduced to the song by record producer Jack Douglas, who produced the Grammy-winning album, which is also credited to Lennon's widow Yoko Ono.

Sir Ringo enlisted the help of Sir Paul, 77, to play bass on the track, which he admitted had brought him to tears when he first heard it.

He said: "Jack asked if I ever heard The Bermuda Tapes, John's demos from that time. And I had never heard all this.

"The idea that John was talking about me in that time before he died, well, I'm an emotional person.

"And I just loved this song. I sang it the best that I could. I do well up when I think of John this deeply. And I've done my best. We've done our best."