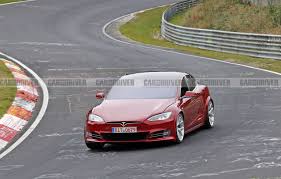 That's when, unfortunately, Road and Track actually called the Nurburgring, who informed them of the truth at the time: that Tesla did not, in fact, have an upcoming track time booked - and that the Nurburgring was instead booked solid for the season.

But one week later, a Model S was spotted at a shop outside of the Nurburgring with "a clear wicker attached to its trunk lid and Michelin Pilot Sport Cup 2 Rs, some of the stickiest and most aggressive tires you can buy today."

But, despite the Model S being at the Nurburgring, Road and Track says they heard the Model S would be instead participating in the Ring's Industry Pool - where timing is "strictly prohibited" and "there's so much traffic that a fast lap is impossible".

Some sources on the ground said that Tesla has booked a private track to set a time for next week. The Nurburgring issued a schedule change for September 21, inserting a new 30 minute private window into a session that was already set for public laps and Ring taxi laps. Carving out time from a public lap session was likely an "expensive proposition" and "guaranteed to make the track money".

Meanwhile, Musk himself has said that the run probably won't be this week.

Check Out This Amazing Tesla Cyber Roadster: Future Meets Past