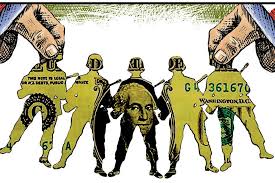 In fact, it filled them with optimism. You see, Russia wants peace but the US seems to want war and keeps making threatening gestures against a longish list of countries that refuse to do its bidding or simply don't share its "universal values." But now it turns out that threats (and the increasingly toothless economic sanctions) are pretty much all that the US is still capable of dishing out—this in spite of absolutely astronomical levels of defense spending. Let's see what the US military-industrial complex looks like through a Russian lens.

It is important to note that the report's authors were not aiming to force legislators to finance some specific project. This makes it more valuable than numerous other sources, whose authors' main objective was to belly up to the federal feeding trough, and which therefore tend to be light on facts and heavy on hype. No doubt, politics still played a part in how various details are portrayed, but there seems to be a limit to the number of problems its authors can airbrush out of the picture and still do a reasonable job in analyzing the situation and in formulating their recommendations.