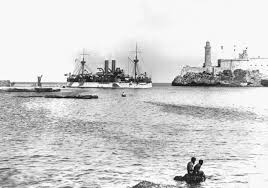 They were three U.S. vessels that played instrumental rolls in enabling U.S. officials to embroil the United States into foreign wars.

The Maine was a U.S. ship that that U.S. officials stationed in Havana harbor in 1898 in the hope of embroiling the U.S. in the Spanish-American War. This was a time of empires, with the Spanish Empire controlling Cuba, Puerto Rico, Guam, the Philippines, and others. Spain's colonial acquisitions were fighting for independence, which was what the war was about.

The U.S. Constitution had called into existence a limited-government republic, one whose founding foreign policy was non-interventionism in the affairs and conflicts of other nations. That foreign policy had lasted about 100 years. By the time the late 1800s came around, however, there were a large number of Americans who favored converting the federal government into an interventionist empire, one that would acquire colonies and intervene in affairs and conflicts all over the world.