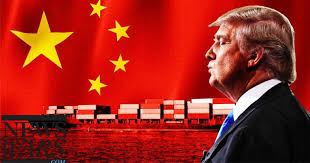 With the trade war between the US and China suddenly erupting after a 5-month ceasefire, CCTV 6, the movie channel of China's leading state television broadcaster, aired three anti-American movies last week, reported What's On Weibo.

The three movies are Korean war films: Heroic Sons and Daughters (1964), Battle on Shangganling Mountain(1954), and Surprise Attack (1960), which aired about one week after President Trump raised an existing 10% tariff on $200 billion worth of Chinese goods to 25%.

All last week, anti-American propaganda flourished across the country, with the slogan "Wanna talk? Let's talk. Wanna fight? Let's do it. Wanna bully us? Dream on!" going viral on Chinese social media platforms.

CCTV 6 broadcasted the movies to 500 million people in 23 provinces. The films fall under a category called "Resist America, Help North Korea," first debuting at the end of the Korean War (1950-1953).

The first movie is Battle on Shangganling Mountain, also translated as Battle of Shangganling. It depicts a group of Chinese soldiers who are fighting against American soldiers on Triangle Hill.