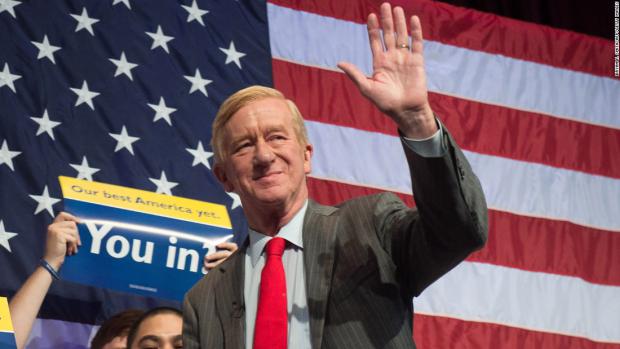 "Ours is a nation built on courage, resilience, and independence. In these times of great political strife, when both major parties are entrenched in their 'win at all cost' battles, the voices of the American people are being ignored and our nation is suffering," Weld, who had previously formed an exploratory committee, said in a statement.

"It is time for patriotic men and women across our great nation to stand and plant a flag. It is time to return to the principles of Lincoln -- equality, dignity, and opportunity for all. There is no greater cause on earth than to preserve what truly makes America great. I am ready to lead that fight."

In 2016, Weld was the vice presidential nominee on the Libertarian Party ticket with former New Mexico Gov. Gary Johnson. He previously served two terms as the governor of Massachusetts in the early 1990s.

Weld ran for Senate in Massachusetts in 1996 and lost against John Kerry. He later moved to New York and in 2005 unsuccessfully sought the Republican nomination for governor.

Weld told CNN's Jake Tapper on "The Lead" that it would be a "political tragedy" and he would "fear for the Republic" if the country had six more years of Trump as President.

"I really think if we have six more years of the same stuff we've had out of the White House the last two years that would be a political tragedy, and I would fear for the Republic," he said.

"I would be ashamed of myself if I didn't raise my hand and run," he told Tapper.

Weld said he will not run as an Independent if he does not win the Republican nomination.

Trump enjoys a nearly 90% approval rating among Republicans, according to Gallup. When asked about the President's historically high approval rating and whether Weld believes he can beat him in the primary, Weld said, "Yeah, I do."

"Particularly in New Hampshire, where I'm spending a lot of time, it's one vote at a time and one voter at a time, and you gotta meet 'em," he said.

Weld described himself as a "Republican who works across the aisle and gets things done," and said he would have a "bipartisan Cabinet" if he won the presidency.

'Lock Up the Bidens,' Trump Says at Georgia Campaign Rally

VIDEO: Watch Trump Dance to the Village People's "YMCA" at His Florida Rally Last Nigh