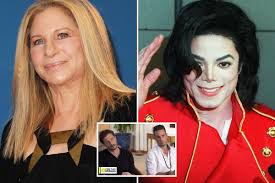 Barbra Streisand has made bizarre statements about the harm suffered by alleged sexual assault victims of Michael Jackson, in an interview published on Friday.

The 76-year-old singer and actor told British newspaper The Times of Londonthat the two main subjects of documentary 'Leaving Neverland,' now-adults Wade Robson and James Safechuck, 'were thrilled to be there' as children and whatever happened to them 'didn't kill them'.

The recently released 'Leaving Neverland' documentary is about how Robson and Safechuck, now in their 30s, say Jackson, who died at age 50 in 2009, sexually abused them from the ages of seven and 10, respectively.

Streisand said she believes the victims' claims, but felt bad for both them and Jackson, adding that Jackson's 'sexual needs were his sexual needs' and the blame should lie with the boys' parents.

The director and producer of that film, British filmmaker Dan Reed, joined many in being appalled at Streisand's remarks.