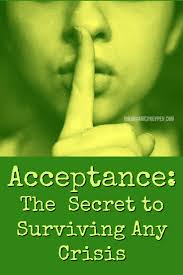 When disaster strikes, will you be ready? Will you be organized, calm, and ready to adapt to whatever the situation brings? Sometimes we have some warning, and sometimes things happen out of the blue. There is one simple secret that will allow you to sail through nearly any crisis. It doesn't cost a lot of money or take up an entire roomful of storage space: acceptance.

You can't take the actions that could save your life until you have accepted the fact that something bad enough has happened that those actions need to be taken.

The more time you spend denying that this  – whatever "this" is – could ever happen to you, happen in your hometown, or occur at all, the less time you have to take definitive action. In fact, your willingness to accept that disaster could strike before it ever does puts you even further ahead, because you'll be ready for immediate action without wasting valuable time wrapping your brain around it.

I'm not the only person who thinks that acceptance is important. Selco wrote that when the SHTF in Bosnia, most people missed the fact that it was all going down until it was too late to take steps to protect themselves.

You may miss the signs. I did.

I have seen all the signs above, and I failed to run. I ended up right in the middle of SHTF.

It is not only important to see and recognize signs. It is important to believe that it can actually happen. Because after I saw all the signs, I just said to myself, "Oh, it cannot happen here. Somebody somehow is gonna solve everything."

It is very hard to trust in something that you did not experience before. Only now do I believe that a lot of horrible things are possible. (source)

He wrote in another article that because he didn't accept how bad things were getting, he did not loot as much as he should have when society broke down. He didn't accept the fact that new rules were in play.

Please understand that when I talk about acceptance, I'm not telling you to just sit there and accept your fate. I'm advising you to avoid your brain's way to protect itself through denial because that will slow you down.

We watched denial at work firsthand during the King Fire.

A few years back, we hovered on the edge of evacuation for 12 days due to the King Fire, a forest fire that nearly reached 100,000 acres.  We got up on a sunny Saturday morning,  never realizing that would be the day an angry man would punctuate a domestic dispute by setting fire to a tree in the other person's yard. Certainly, no one expected that one act of anger to set off a fire that would exceed the size of the city of Atlanta.

However, he did set that fire, and it came as close as 2 miles to our home over the almost-two-weeks that we watched with bated breath.

You Won't Understand The Extent Of The Economic Crisis Without Getting This!

Forging with ALEC STEELE: Hammer Technique, How To Forge for the First Time