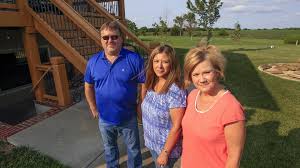 "We're going to tell you this once," the message began that told Jonathan Endicott to give up his fight against the MicroMansions tiny homes development planned near his Cambria neighborhood, just south of Harry and 143rd East.

"If not we will use all of our resources, money and means to stop you. You're dealing with powerful people that have no problems attacking your business, life and family if you choose not to stop."

Endicott reported the note to police, though he says an officer told him since there weren't specific threats of bodily harm he couldn't file a report.

The email came on Friday morning from someone claiming to be named Jim Ryun, but MicroMansions developer Abby Nelson said via email that she doesn't know anyone by that name, "nor have we asked anyone to help on our behalf."

Dave Murfin, who owns the land where the development will be built, didn't return calls to comment.

MIT scientists create doomsday computer program to decide what to do if an asteroid is...

Truth Matters to the Government, Sometimes

Mike Bloomberg Is A Russian Asset

Greyhound says it will STOP Border Patrol agents without warrants from boarding buses...

Peter Schiff: Gold Is Your Only Alternative

Did The Fed Just Reveal Its Plans For A Digital Dollar Replacement?