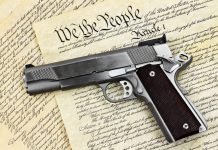 Washington, often in federal agencies with vast sway and little accountability. According to a March poll, 74 percent of Americans believe that a deep state probably exists.

Unfortunately, the deep state could increasingly focus on gun owners in the coming years. The number of Americans who are violating firearm laws and regulations is increasing by tens or hundreds of thousands almost every year. This is not the result of a violent crime wave, but because politicians are continually criminalizing the possession of items that were previously legally owned.

Five years ago, the Connecticut legislature decreed that all owners of so-called "assault weapons" (which included any semi-automatic rifle with a pistol grip) must register their firearms. Perhaps as few as 15 percent of gun owners bothered to comply with the new law—meaning that Connecticut had up to 100,000 "criminals" living within its border. A 2016 Albany Times Union editorial lamented that 96 percent of roughly 1 million New Yorkers who owned so-called "assault weapons" failed to comply with registration requirements. California gun bans have been met with similar, massive non-compliance. Undeterred, local governments have begun jumping on the bandwagon. Deerfield, Ill., recently decreed a $1,000-a-day penalty on anyone who fails to surrender or disable their semi-automatic firearms with cosmetic features that frighten politicians and editorial writers.

While such laws were made by elected officials, it is unelected bureaucrats who are largely left in charge of enforcement, and that can cause big problems for gun owners. Just before press time for this issue, it was reported that a California farmer who was simply trying to meet the state's ever-changing restrictive gun laws by registering his rifle is being charged with 12 felonies after the state DOJ determined his AR-15 to be "illegally modified." That determination served as grounds for the agency to raid the man's home and confiscate 12 firearms, 230 rounds of ammunition and two suppressors. He was later released on $150,000 bond, and at press time the case was still pending.

In addition to such state actions, there is a growing clamor on Capitol Hill to impose a nationwide ban on AR-15s and other semi-automatic firearms. If that happens, most gun owners are unlikely to surrender their prized possessions in response to a D.C. dictate. As a result, millions of Americans could technically become felons overnight for refusing to obey what they consider an unjust law.

The deep state's surveillance and investigative powers make it far easier to target firearm-ban scofflaws than in earlier times. Anti-gun sentiment will seek to legitimize any surveillance or enforcement efforts carried out by federal agencies. At a time when politicians are shamelessly comparing the National Rifle Association to a terrorist organization, gun owners may face much wider assaults on their rights and privacy than have previously occurred.

Politicians have long relied on the secrecy of deep-state agencies to carry out campaigns intended to undermine the Second Amendment. After the 2014 showdown at a Nevada ranch, the FBI created a bogus independent film crew that spent a year hounding and videotaping the Bundy family and their supporters to gin up federal charges. Last January, a federal judge dismissed the case against the Bundys, in part because of pervasive FBI lying (including three years of denials that an FBI sniper team was deployed near the Bundys' home). But the FBI suffered no penalty, and there is no reason to expect the agency will not try the phony film crew gambit again.

The deep state has more levers than most Americans recognize. Because Congress has designated more than 4,000 criminal offenses and federal regulatory agencies have greatly expanded these through interpretation and rulemaking, bureaucracies have vast discretion to target whom they please. In 2012, the Obama administration launched Operation Choke Point, supposedly to "choke" illegal businesses' access to financial services. The Justice Department and the Federal Deposit Insurance Corporation (FDIC) targeted firearm dealers, resulting in legitimate businesses having their assets frozen based on mere suspicion that they had failed to complete federal background checks on purchasers.

WARNING: DO NOT ATTEND Armed Protests at State Capitols Before Inauguration!

How to Build a Gun Club: A Guide to Organizing and Starting Your Own Local Gun Club

Rep. Boebert Defends Right to Keep Her Gun With Her in DC

Armed Robber Realizes He Picked the Wrong Store When Employee With Concealed...

Collectible Weapons: How to Protect Your Wealth – and Your Family – With Valuable Guns