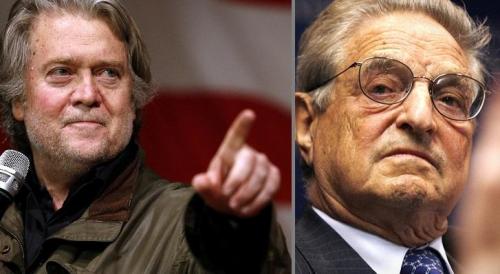 And just how does the former White House chief strategist and Goldman Sachs alum plan to do this?

Bannon will set up a Brussels-based non-profit NGO called "The Movement" which will go head to head with Soros - with the goal of uniting like-minded European parties and various conservative think tanks along with other support structures.

The non-profit will be a central source of polling, advice on messaging, data targeting, and think-tank research for a ragtag band of right-wingers who are surging all over Europe, in many cases without professional political structures or significant budgets.

Bannon's ambition is for his organization ultimately to rival the impact of Soros's Open Society, which has given away $32 billion to largely liberal causes since it was established in 1984.

Over the past year, Bannon has held talks with right-wing groups across the continent from Nigel Farage and members of Marine Le Pen's Front National (recently renamed Rassemblement National) in the West, to Hungary's Viktor Orban and the Polish populists in the East. -Daily Beast