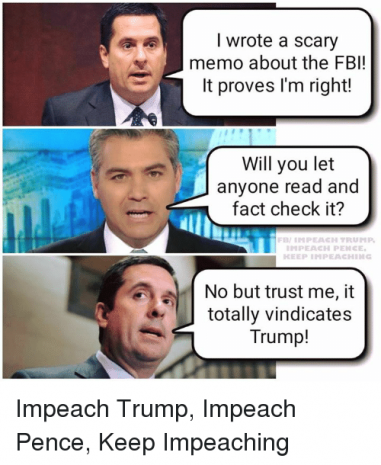 With the moment of truth - over-hyped dud or Democratic-establishment-crushing dream - looming in less than 24 hours, the headlines, finger-pointing, pettiness, and back-stabbing has reached 11 on the Spinal Tap amplifier of debacle... to the point where some humor in this FISA farce may help everyone get through the weekend.

The following is the latest to cross the wires...

Stressing that such an action would be highly reckless, FBI Director Christopher Wray warned Thursday that releasing the "Nunes Memo" could potentially undermine faith in the massive, unaccountable government secret agencies of the United States.

"Making this memo public will almost certainly impede our ability to conduct clandestine activities operating outside any legal or judicial system on an international scale," said Wray, noting that it was essential that mutual trust exist between the American people and the vast, mysterious cabal given free rein to use any tactics necessary to conduct surveillance on U.S. citizens or subvert religious and political groups.