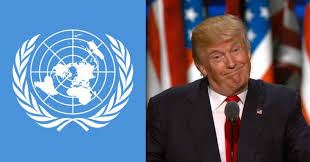 "In recent years, the United Nations has not reached its full potential because of bureaucracy and mismanagement, " Trump said at the 72-year-old organization during a meeting on reforms.

Despite a ballooning budget and a doubling of staff since 2000, Trump said, "We are not seeing the results in line with this investment" and encouraged UN Secretary-General Antonio Guterres to focus more on people than bureaucracy.

"We seek a United Nations that regains the trust of people from around the world," the president said in his tightly scripted five-minute address. "In order to achieve this, the UN must hold every level of management accountable, protect whistle-blowers and focus on results rather than on process."

"We encourage all member states to look at ways to take bold stands at the United Nations with an eye toward changing business as usual and not being beholden to ways of the past, which were not working," he said, pledging the US would be a full partner in the reform efforts.