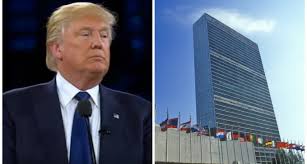 Donald Trump takes center stage at the United Nations next week when world leaders gather in New York, anxious to hear the US president outline how he is reshaping Washington's role in global affairs.

The nuclear crisis with North Korea, the future of the Iran nuclear deal and Myanmar's military crackdown against Rohingya Muslims are expected to top the agenda at the world's biggest diplomatic gathering.

Trump will deliver his first address to the annual General Assembly high-level debate, which kicks off Tuesday with 129 heads of state and government set to attend.

But all eyes will be on Trump, whose election last year was described as a political earthquake by UN diplomats now struggling with unclear US policies on global crises, from Syria to South Sudan.

Washington's friends and foes have been grappling with the implications of Trump's "America-First" policy and his address will be closely-watched for signs of what's in store.

While Trump is expected to play to a domestic audience by reasserting the themes that have made him popular at home, diplomats are not ruling out some signs of a shift, on climate change, for instance.

The United States sparked global outrage when it announced in June that it was pulling out of the Paris climate agreement, but that process will take three years, allowing time for a re-think.

"Expectations are low, but that may play to Trump's advantage" said Richard Gowan, a UN expert from the European Council of Foreign Relations.

"If he makes any friendly gestures, like hinting that the US could actually stay in the Paris climate change agreement with a few tweaks, he will be acclaimed as a statesman."

"Globally, public opinions of the president are pretty low," said Martin Edwards, a UN expert at Seton Hall University. "I expect the tone to be off-putting rather than engaging."

On Tuesday, the French president will take the podium just a few speakers after Trump and deliver an address that will champion multilateralism and renew his call of action on climate change.

Macron "can roll out an inspiring vision of global cooperation to eclipse the US president," said Gowan.

"If Trump crashes and burns with a really nasty speech, Macron will look particularly good."