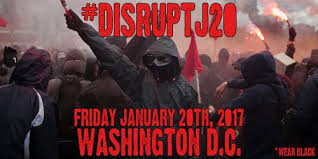 A District of Columbia Federal Judge has approved a government warrant seeking information about users and subscribers to an anti-Trump website which has been linked to rioting during the presidential inauguration in Washington, D.C., but he added protections to safeguard "innocent users."

Chief Judge Robert Morin ruled that DreamHost, an LA-based web-hosting company, must turn over data about visitors to the website disruptj20.org, which is a home to political activists who organized protests at the time of Donald Trump's inauguration as U.S. president in January, many of whom have since morphed into the controversial "antifa" movement.

Morin, who will oversee review of the data, also said the government must explain what protocols it will use to make sure the data of "innocent users" is not seized by prosecutors, according to Reuters. Bloomberg adds that prosecutors would have to tell the judge which data it intended to seize.

"I'm trying to balance the First Amendment protections and the government's need for this information," Morin said. "My view here is that this best protects both legitimate interests."

In the closely watched case, which could have a material chilling effect on similar activist website, the DOJ said it sought the records connected to the site amid concerns that it helped facilitate the planning of protests on Inauguration Day in which more than 200 people were arrested for rioting and vandalizing businesses in downtown Washington.

DreamHost resisted the original July 12 warrant, saying the scope of the warrant was too broad and trampled on the rights of 1.3 million visitors to the site, many of whom were simply exercising their First Amendment rights to express their political views. It also said the warrant would expose the identities of the 1.3 million people who had visited the site.

The Justice Department last week proposed amending the scope of its warrant to exclude the IP addresses of website visitors and limit the search only to records from July 1, 2016 to Jan. 20, 2017.

But DreamHost argued that the warrant was still too broad, as it could sweep in people who sent emails to disruptj20 addresses. The company objected to the two-step process that would require it to turn over data in bulk and let prosecutors search for and seize evidence of criminal involvement in the riots.

At Thuesday's hearing, Judge Morin said that he recognized the tension between free speech rights and law enforcement's need to search digital records for evidence. He said he added safeguards to his order granting the government's request for information in an effort to balance those two concerns.

According to Bloomberg, the warrant initially sought all data and records pertaining to disruptj20.org, including information about site visitors. Prosecutors said details on subscribers -- including names, addresses, phone numbers and the contents of email accounts within the disruptj20.org domain -- would help identify those who organized and participated in the riots.