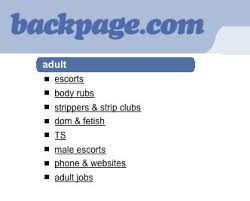 The Senate on Tuesday introduced an amendment to a law that protects the hosts of websites from liability for content posted by others to go after sites such as Backpage.com that have been criticized for facilitating child sex trafficking.

The legislation, along with a similar bill in the House, sets the stage for a battle between Congress and some of the Internet's most powerful players, including Google and various free-speech advocates, who believe that Congress shouldn't regulate Web content or try to force websites to police themselves more rigorously.

The bill, titled the Stop Enabling Sex Traffickers Act of 2017, would amend the Communications Decency Act. It is sponsored by Sen. Rob Portman (R-Ohio) and a bipartisan group of 19 other senators, some of whom served on the Permanent Subcommittee on Investigations, which focused on Backpage.com in its probe of online sex trafficking. The subcommittee, chaired by Portman, issued a report in January saying that Backpage "knowingly facilitated the criminal sex trafficking of vulnerable women and young girls" by editing ads posted by pimps to remove offensive language.

Backpage has fended off many civil and criminal actions aimed at shutting down its sex-related ads by citing Section 230 of the Communications Decency Act, which states that no website "shall be treated as the publisher or speaker of any information provided by another information content provider." Backpage has argued that it merely hosts ads created by others and so has no liability. The Washington Post revealed last month that Backpage uses a contractor in the Philippines to solicit sex ads from other websites and also posts sex ads on other sites to attract more customers.

After The Post published its articles, Portman, Claire McCaskill (D-Mo.) and three other members of Congress called on Attorney General Jeff Sessions to pursue a criminal investigation of Backpage. The Justice Department has not publicly responded to that request.

"You Have a Rendezvous with Destiny, Mr. Vice President"...