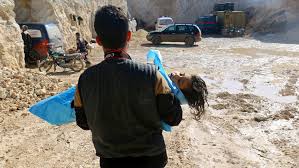 The responses I received were, in my view, unresponsive and unsatisfactory. But I cannot publish them because of rules on such matters,which in general I support and to which I had willingly agreed in advance, and because the FO declined to waive those rules when I asked them to do so.

In his article in the Sunday Telegraph of 16th April 2017, the Foreign Secretary states that:

'British scientists have analysed samples from the victims of the [Khan Sheikhoun] attack.'

Where and when did they do this?

What assurances did they have of the provenance of the samples?

Who controlled the custody chain, and vouched for it?

How did they know that the samples were at no stage handled by persons with a propaganda interest in a certain outcome?

Were they at any stage under the control of Tahrir al-Sham, formerly Jabhat Fateh Al Sham (previously the Jabhat Al-Nusra), or any other part of that faction?

If not, how did they leave Syria?

Under whose custody were they between Khan Sheikhoun and the Syrian border?

How do we know?

He also says : 'These have tested positive for sarin or a sarin-like substance.'