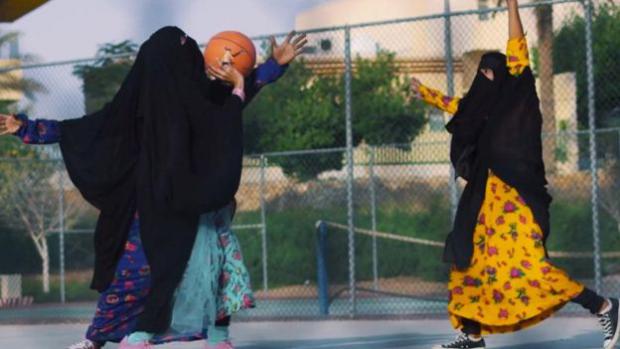 The video entitled 'Hwages', loosely translated in English as 'Concerns', shows women in Saudi Arabia skateboarding, playing basketball and dancing.
Created by media production company 8ies, the video has been viewed nearly three million times on YouTube since it was uploaded in late December.
It features women in full Islamic dress taking part in various activities, singing lyrics that include: 'If only God would rid us of men'.

The video appears to express women's frustration with the male-dominated society in Saudi Arabia.

Male guardians decide on what women can do, for example permission to travel abroad or to undertake higher education.

On YouTube, one user commented: "Unbelievable video clip!! The voice is bad and the content is worse.. Imagine the girls drive (cars) and men are dressed like that and dance. May Allah protect us."

While another added: "The video clip is beautiful. With all the comedy, it shows one aspect of oppression girls are subjected to."