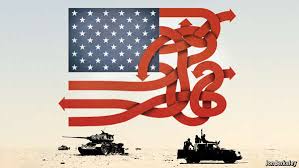 One of my favorite literary expressions is the term 'Parthian shaft.' It refers to the favored tactic of the Parthians, a Persian people, of turning while on horseback and firing arrows while retreating.

The Roman consul Crassus, who defeated Spartacus, may have died from such a Parthian shaft after his defeat at the battle of Carrhae in 53 BC.

This week, outgoing President Barack Obama loosed his own Parthian shaft at Israel's leader, Benjamin Netanyahu, by refusing, for once, to veto a UN Security Council resolution condemning Israel's ongoing expropriation of Arab land on the occupied West Bank.

There was no mention of similar expropriation and ethnic cleansing on the Israeli-occupied Golan Heights which legally belong to Syria.

For the past eight years, the Obama administration has discreetly
argued with Israel over its settlement building on the West Bank and Jerusalem. In public, the Obama government maintained the ludicrous but convenient fiction that fruitful talks were under way that would lead to creation of two states in historic Palestine.