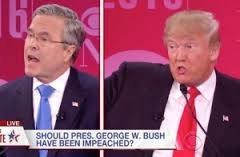 Donald Trump, for all his obnoxious demagoguery, is adding value to the presidential campaign by calling former President George W. Bush to account for 9/11 and the Iraq war, which set in motion the growth and spread of al-Qaeda and the rise of the Islamic State. Former U.S. rulers rarely face consequences for the horrible things they do in office. Condemnation is considered impolite.

So good for Trump. Unfortunately, he shows no sign of having done his homework; so his charges against Bush are little more than soundbites, allowing Bush defenders to dismiss Trump as a kook. But this time he is not a kook.

Trump presumably does not mean that Bush knew where and when al-Qaeda would attack. Detailed foreknowledge is not part of the case against Bush. All we need to know is that Bush and his top people, starting with Vice President Dick Cheney, were too busy in their first eight months in office to bother about al-Qaeda and Osama bin Laden. Too busy doing what? Among other things, they were too busy looking for an excuse to overthrow Iraqi dictator Saddam Hussein. Bush's father, George H. W. Bush, had left Saddam in power after sending the US military to reverse Iraq's invasion of Kuwait in 1991. But the elder Bush and successor Bill Clinton enforced killer economic sanctions, on the pretext of finding weapons of mass destruction, but actually in hopes of driving Saddam from power.