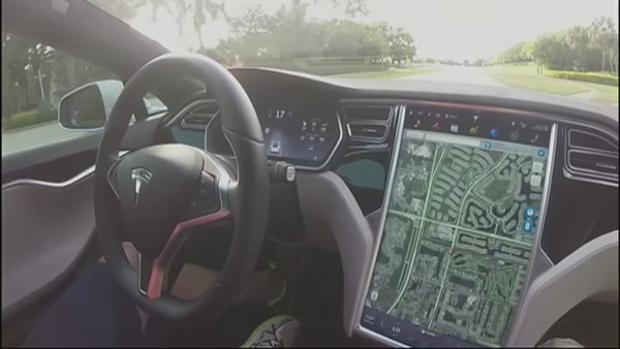 Tesla, apparently, felt so confident in its new autodrive capability (downloaded by all charging Teslas overnight) that an email from a strange reporter's Gmail account landed said reporter behind the steering wheel of a $70,000 Tesla doing very little steering while driving 50-something miles per hour on the island of Manhattan.

Officially Tesla describes vehicles running its Version 7.0 software as "semi-autonomous," supposedly still requiring the driver to drive at all times. But with autopilot engaged, those vehicles change lanes, brake, steer, accelerate, decelerate and avoid obstacles by themselves, thanks to a forward-looking camera that reads road signs, a radar, a GPS system and 12 ultrasonic sensors that give the car 16 feet of awareness in all directions at any speed.

The Autopilot system currently can't react to traffic lights or stop signs so it is not truely able to go into autopilot, especially in Manhattan.

Google's Self-Driving Car Project has dispatched vehicles in two small U.S. cities. Volvo's already claimed responsibility for any future accidents caused by its future self-driving cars. But as of last Thursday, Tesla became the first automaker to give consumers of existing vehicles the ability to switch to autopilot. So, when Tesla owners woke up last week and found their smart cars even smarter after a night of charging, many likely wondered (perhaps while their vehicle drove them around): If their car could now (sort of) drive itself, what would it do next?

Lamborghini lifts the lid on a supercapacitor-enhanced Sian Roadster

Uber goes all in with grocery delivery

Dr. Daniel Neides wrote a highly viewed column that suggested a link between vaccines and autism

Dr. Plotkin speaks under oath about the escalating levels of aluminum included in every vaccine