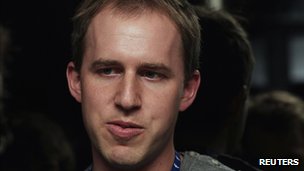 Last month, Facebook floated part of the company on the Nasdaq stock exchange, making many of its employees millionaires overnight.

Observers speculated at the time that some would move on to other things.

Facebook shares have fallen sharply since the flotation to $30, 21% down on the launch price of $38.

The company is also being sued by disgruntled shareholders, who allege that Facebook's revised growth figures were not disclosed to all investors prior to the flotation.

Morgan Stanley, the lead underwriter on the share sale, said it had fully complied with the rules.

Mr Taylor said he was "sad to be leaving, but I'm excited to be starting a [new] company".

"While a transition like this is never easy, I'm extremely confident in the teams and leadership we have in place."

He said he was proud of the site's recent developments, including its Facebook Camera and integration with Apple products.

Facebook founder Mark Zuckerberg said he had enjoyed working with Mr Taylor and was "grateful for all he has done for Facebook and proud of what he and his teams have built."