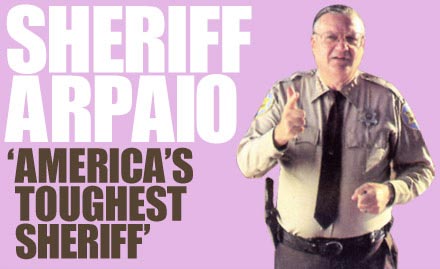 Steven Seagal is being threatened with a lawsuit over his part in a police raid that was taped for his A&E reality show, TMZ reported.
The actor, who has served as a reserve deputy sheriff since the mid-'80s, was part of a team that arrived at Jesus Sanchez Llovera's Arizona house in March with a tank and armed in full riot gear, Llovera alleges in his legal documents.
VIDEO: Steven Seagal Arrives for Police Bust in Tank
Llovera claims that the raid, carried out by the Maricopa County Sheriff's Department, was "unfounded" because they believed Llovera was raising roosters for illegal cockfighting. But he says the roosters are only "for show."
Llovera -- who served both Seagal and Sheriff Joe Arpaio with an official notice of claim, the first step toward a lawsuit -- says his 11-month-old puppy was shot and killed during the raid and that police also killed more than 100 of his roosters.
STORY: A&E, Steven Seagal Resolve Multimillion-Dollar 'Lawman' Suit
Additionally, he says the police rammed the tank into a gate on his property and that his home suffered "substantial damage."
Llovera is seeking $100,000 in damages and wants a "formal written apology" from Seagal to his children for the death of their puppy, "a beloved family pet."
According to TMZ, the entire incident was recorded for Seagal's reality show, Steven Seagal Lawman.
A&E declined comment when contacted by The Hollywood Reporter. Seagal and the Maricopa County authorities have yet to comment.

$100,000.  That's it!  You got traumatized kids, destroyed property, you haven't been able to have sex since this happened with visions of Seagal poking his head through your wall....add a couple of zeros.  What kind of lawyer do you have?  Get one who has an animal as a mascot on TV.

Minneapolis delivers on its George Floyd promise to defund police and wipes $8m from...

"Where Are The Police?" After Voting To Defund Cops, Minneapolis City Council Baffled...