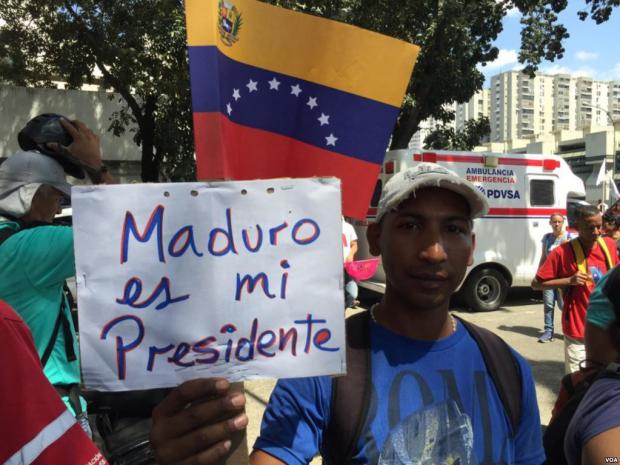 Defending Venezuelan Democracy Against US Tyranny

Venezuela is the hemisphere's preeminent social democracy - a notion the US and other Western nations abhor.

It's why the Bolivarian Republic is targeted for regime change, along with Washington wanting control over its world's largest oil reserves and other valued resources.

Democracy in America is pure fantasy, a nation run by its war party in cahoots with Wall Street, the military, industrial, security, media complex, and other predatory corporate interests - seeking dominion over planet earth, its resources, and populations by brute force if other tactics fail.

US aims include controlling the message, manipulating the public mind, wanting the official narrative drowning out conflicting views - what's behind the persecution of Chelsea Manning, other whistleblowers, and truth-telling journalist Julian Assange.

More of the same is sure to come, digital democracy threatened, what totalitarian rule is all about.

It's about mass surveillance, Big Brother watching everyone, today with technological ease, fundamental freedoms eliminated, public welfare ignored, nonbelievers silenced - the worst of what Orwell imagined, what tyranny is all about.

What's going on is all about manufacturing endless crises, chaos, and fake national security threats, pretexts for perpetual wars and other hostile actions, expanding NATO into a US-controlled global military, achieving total control over mass media.

It's about farcical elections when held, dirty business as usual winning every time - assuring powerful interests control everything, ordinary people everywhere exploited to serve them.

Venezuela is in the eye of the storm, the Trump regime wanting US-controlled fascist tyranny replacing its social democracy.

In Chile, the first stop on Pompeo's four-nation Latin America tour, visiting with repressive regimes, aiming to harden regional support for the US coup plot against Venezuela, he repeated his customary litany of bald-faced Big Lies.

He slammed China, turning truth on its head about its cooperative relations with Latin American countries and others elsewhere, polar opposite how the US operates, wanting them exploited, saying:

"China's bankrolling of…Maduro (sic) helped precipitate and prolong the crisis in that country (sic)…(I)t's no surprise that Maduro used the money to use for tasks like paying off cronies (sic), crushing pro-democracy activists (sic), and funding ineffective social programs (sic)."

All of the above are bald-faced Big Lies with more to come - falsely accusing China and Russia of "help(ing) (to) destroy" Venezuela (sic).

The Kremlin "has longstanding ties to authoritarian leaders in Cuba and in Nicaragua (sic). It sells arms (its legitimate right - for defense, not warmaking the way the US operates)."

"It propagates lies (sic). It disseminates all types of propaganda in those countries (sic)."

Many more of the same Big Lies followed, a US specialty, ignoring its abhorrence of world peace and stability, its global war on humanity at home and abroad, its war OF terrorism, not on it, its growing homeland tyranny, its wanting all sovereign independent governments toppled.

Has imperial America met its match in Venezuela, failing after nearly three months to illegally oust its social democratic government?

Tens of thousands turned out in Caracas and elsewhere in the country. The image of a woman holding up a well-used pocket-sized copy of Venezuela's Constitution symbolically showed its importance to most Venezuelans.

They want it preserved and protected, along with Bolivarian social democracy, wanting dirty US imperial hands kept off their country.

In 2009, Chavez created Venezuela's National Militia, largely made up of volunteer civilians, supportive members of the country's armed forces in their ranks - dedicated to defending the nation against US and other foreign threats.

In 2018 under Maduro, militia ranks nationwide numbered 1.6 million. Currently they're 2.1 million-strong - ordinary Venezuelans opposed to US war on the country by other means or naked aggression if things go this far.

On Saturday, Maduro announced the following, saying Chavez "dreamed of a powerful and great militia…The militia will (legislatively) receive a constitutional rank as a full-fledged part of the country's armed forces" - aiming to increase their ranks to three million by yearend.

Bolivarian Venezuela is proudly independent, free from the scourge of US imperial control. Its majority ordinary people want it kept this way.

In street banners, signs and chants, their slogan is: "US Hands Off Venezuela."

On March 16, activists in Washington and other global cities marched as part of World in Solidarity with Venezuela Day.

Sponsored by the Answer Coalition: Act Now to Stop War & End Racism, along with other activist groups, they rallied in support of "US hands off Venezuela! NO to the coup. NO to sanctions. NO to a new US war," a statement saying:

"The White House aims to overthrow the government of President Nicolas Maduro and replace him with Juan Guaido…a US-trained operative…(who) proclaimed himself president — at Vice President Mike Pence's urging."

The Trump regime wants to start another "rich man's war on an oil-rich nation…(T)he aggressive policy against Venezuela repeats the ugly pattern of (US-led) wars for regime change in the oil-rich countries of Iraq and Libya."

After nearly three months of trying, everything thrown at the Bolivarian Republic by the US failed, including sanctions and electricity grid war, fake humanitarian aid, (a trojan horse PR stunt fooling no one), an attempt to win majority popular support, and most important of all - failure to get the country's military to back the coup.