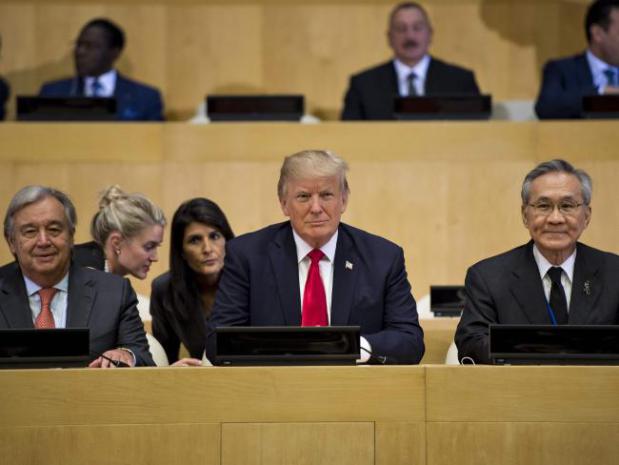 A handful of countries alone got to participate, ones willing to sign Trump's 10-point plan. Upper house Federation Council Defense and Security Committee First Deputy head Franz Klintsevich called his proposal "a diktat rather than a discussion," adding:

"I cannot really judge if UN reform is timely at the moment, and whether it may cause bigger disputes among countries. Those are, so to say, issues of a different layer, but anyway this is not the way to address them."

His draft declaration states "(w)e support the secretary-general in making concrete changes in the United Nations system to better align its work on humanitarian response, development and sustaining peace initiatives."

"We commit to reducing mandate duplication, redundancy and overlap, including among the main organs of the United Nations."

He wants America's funding commitment cut, other countries paying more. As of September 18, 128 nations signed his declaration, most pressured to go along or risk US wrath.

China and Russia weren't among them, 63 other nations not on board so far. Russia's UN envoy Vasily Nebenzia said none of Trump's idea complied with what was suggested by Secretary-General Guterres, adding:

Reforming the world body can't be undertaken by "declaration." An inter-governmental process alone is acceptable and equitable.

Further, UN reform can only be carried out with the consent of all member states. Opposition by Russia and China alone to Trump's unacceptable proposal kills it in its current form.

He wants a UN makeover accommodating US interests more than already, an idea going nowhere.

Claiming America aims to make the world body more effective in pursuing world peace is laughable on its face - coming from a global hegemon, waging endless wars of aggression, smashing one country after another, threatening others with annihilation and regime change.

"(T)he United Nations has not reached its full potential due to bureaucracy and mismanagement,",Trump thundered.

Reforming the world body makes sense, but not according to US wishes alone, ignoring the collective will of all 193 member states. They all have a say on this issue.

Blasting Lies Ahead of Induction into the Hall of Infamy