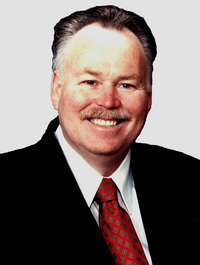 Here is the obituary for Powell...

Here are some things that you may or may not know about Powell...

An NAU graduate, and a 50 year Arizona resident.

I was a tool of the state for many years, until I got a harsh lesson that the only mission in government is to make your bosses shine. Private industry pays. But the market for non-clinical molecular biology or infectious disease lab managers is very small in Phoenix. With the help of Ernest Hancock (as Publisher) and Tyger Gilbert (as it's founding webmaster), I helped start Freedom's Phoenix and am now, after 10 years as FP's Senior Editor, retired.

Political Bio: I became interested in libertarian philosophy in the late 70's, getting an introduction to it from a Flagstaff physician, Dr. Murray Feldstein.

I left the Republican Party sometime in the early 90's disillusioned by their behavior and specifically the lack of criticism for the socialist legislation being offered by John McCain.

I discovered the Arizona Libertarian Party (www.AZLP.org) a few years later. And was very involved from early 1999, until the corrupt Arizona Appellate Court black robes handed control of the AZLP over to the State. Is there anything more antithetical to libertarianism than that? The black robes are above the people's right to freely associate.

After that, I left the Party, but continued my activism as part of the Western Libertarian Alliance (www.WesternLibertarian.org) .

My Philosophy: Freedom good! Government bad, bad, bad, bad, bad. I will not initiate force, or fraud against any individual. I will resist those who do when prudent with all means at my disposal. I will approach all individuals with the idea of interacting with them through mutually agreed upon conditions. What other political or personal philosophy do you need? And wouldn't the world be a more peaceful place if everyone learned to mind their own business?

Photos from the Memorial and Reception can be viewed at: https://www.freedomsphoenix.com/News/198185-2016-06-06-goodbye-powell-we-will-miss-you-greatly.htm Ed

Thank you Powell for caring about freedom and for opposing tyrants, with intelligence, patience and humor. Respect and Peace.

Powell Great to know you and everything you brought to the Freedomsphoenix.com staff meetings. I had the pleasure to video you once. https://www.youtube.com/watch?v=ptdUL77CTrY Keep on rocking the free world!

I was shocked to read of his passing. I was only marginally acquainted with Powell, but I will always remember the time we were the only two people to show up and protest the UN's encroachments. We had a nice conversation.

I considered Powell a friend. He had a tremendous knowledge of fruiting plants and his expertise will be missed. I shared many of his feelings on politics and I admired his willingness and ability to do something. People need to do more of their own thinking so power brokers don't have total control.

Today from the podium at the Libertarian Party National Convention, Powell Gammill was memorialized for his efforts and accomplishments for liberty. I am still processing this information and will have plenty to say once I get back and have access to my computer. Powell is here with his friends in Orlando... allow us to say good bye before we let him go. Ernie

Sent from an acquaintance of Powell... "Powell was a frequent contributor to a number of online gardening forums, with the user name "Fascist Nation". His knowledgeable comments and insights will be missed. Rest in peace, Powell." ~Gary Vankirk

My condolences to his Family. I always admired Powell's passion for freedom and truth. He will be missed by all who love freedom.

Thank you for your patience and generosity with a (at the time) young activist. You even took the time to help me on my first job search after college. Your positive influence will continue to ripple throughout the world long after your passing, but I will still miss you. Wish this message was not postmortem. Time is indeed fleeting as we pass through. Rest in peace, Powell.-Craig Stritar