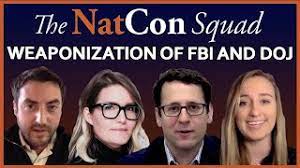 Widely misreported by the media including even RT as a "riot at the US Capitol," the small disturbance was provoked by federal agents who had infiltrated those present.

We know from abundant videos that the police opened the doors and allowed people to enter the Capitol.  Those who entered were peaceful and wandered around, as videos show, before leaving.  A couple of people took selfies of themselves sitting in Nancy Pelosi's chair.  This was turned into a seditious conspiracy against democracy.

Consider as well that the rally was supporting those Republicans in Congress who insisted on presenting the evidence of the stolen election to Congress prior to the confirmation of Biden as the winner.  The Trump supporters had no interest in disrupting this presentation.  It was this presentation that the orchestration of conflict at the Capitol was used by the Democrats and the Rino Republicans such as Mitch McConnell to prevent.  I don't think that Trump and his supporters at the time understood that the Republican Establishment is as opposed to Trump as are the Democrats and the presstitutes.  Trump's presidency was unsuccessful, because Trump appointed and surrounded himself with Rino Republicans. He staffed his administration with his opponents.