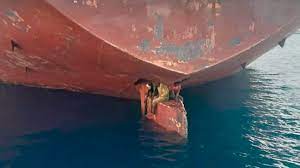 The Spanish coast guard posted a dramatic photo of the three men precariously perched atop the rudder of the Maltese-flagged Alithini II as it arrived in Las Palmas, Gran Canaria, on Monday.

Their feet are seen dangling just inches above the water behind the massive hull.

The ship — which left Lagos, Nigeria, on Nov. 17 — covered some 2,000 miles during the 11-day journey to the Spanish territory off northwest Africa, according to tracking website Marine Traffic.

They were treated for dehydration and hypothermia after their perilous trip, officials said.

Txema Santana, a migration adviser to the local government, said in a tweet: "It is not the first and it will not be the last. Stowaways do not always have the same luck."

Migrants rounded up outside NYC hotel

Outrage on Refugees and Silence on Sanctions