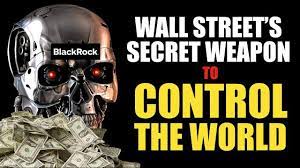 It made its mark by emphasizing risk management for its clients, and by the time the Global Financial Crisis hit in 2008, BlackRock was perfectly positioned to take over Wall Street, helping to sort through the mess of toxic subprime mortgages that BlackRock CEO had helped pioneer decades before.

And, as we saw last week, BlackRock leveraged this power to begin shaping the course of events. They proposed a radical new form of market intervention that central banks could use to pump money directly into the retail economy, and just weeks later the Federal Reserve was employing that "Going Direct" plan in their repo market intervention. The scamdemic, it turns out, was largely an excuse for the Fed to cover their multi-trillion dollar market intervention and for BlackRock to consolidate their mammoth economic and political power, engineering yet another bailout for the benefit of their own investments.

At this point in our exploration, we find ourselves confronting the most important question of all: now that BlackRock has scaled the summit of Mount Olympus and are in control of a mind-boggling amount of wealth, what is Larry Fink and his gang planning to do with their newfound powers?

The Fed's Game Of Chicken With The Stock Market