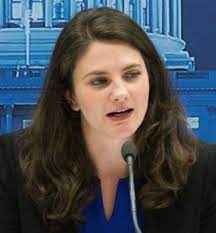 The Department of Homeland Security (DHS) has placed a "pause" on the newly-minted Disinformation Governance Board; its first executive director, Nina Jankowicz, has resigned.

The board's existence, which was announced just three weeks ago, prompted serious concerns from many civil libertarians and inspired Ministry of Truth comparisons. DHS Secretary Alejandro Mayorkas tried—and largely failed—to address these concerns by noting that the board would serve in merely an advisory capacity and not have any actual power to police speech. That the Disinformation Governance Board did a bad job of communicating information about itself did not exactly instill confidence, and evidently DHS has now realized that the entire project is a bad idea.

It's unclear whether plans for the board will be un-paused in the future; Jankowicz had initially decided to resign, reconsidered when she was told the pause might be temporary, and then ultimately left anyway.

This news comes from an exclusive report by The Washington Post's Taylor Lorenz, whose scoop is buried underneath layers of pro-government verbiage. Lorenz's story excessively flatters Jankowicz—she is glamorized as "well-known" in the field, having "extensive experience," and "well-regarded" in just the first two paragraphs—while ignoring legitimate criticism of this so-called expert's track record. Indeed, there is zero mention, none whatsoever, of the fact that Jankowicz was flagrantly wrong about the pivotal "disinformation" episode of the 2020 election cycle: the Hunter Biden laptop story.

For WaPo, the story is not that DHS shuttered the Disinformation Governance Board—the real story is that right-wing "coordinated online attacks" achieved this outcome after subjecting Jankowicz to an "unrelenting barrage of harassment."

"Within hours of news of her appointment, Jankowicz was thrust into the spotlight by the very forces she dedicated her career to combating," writes Lorenz.

She concedes that the board's name was "ominous" and details about its specific mission were "scant." But most of the article focuses on the tenor of the criticism of Jankowicz.