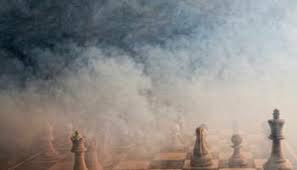 While we are all familiar with Sun Tzu, the Chinese general, military strategist and philosopher who penned the incomparable Art of War, less known is the Strategikon, the Byzantium equivalent on warfare.

Sixth century Byzantium really needed a manual, threatened as it was from the east, successively by Sassanid Persia, Arabs and Turks, and from the north, by waves of steppe invaders, Huns, Avars, Bulgars, semi-nomadic Turkic Pechenegs and Magyars.

Byzantium could not prevail just by following the classic pattern of Roman Empire raw power – they simply didn't have the means for it.

So military force needed to be subordinate to diplomacy, a less costly means of avoiding or resolving conflict. And here we can make a fascinating connection with today's Russia, led by President Vladimir Putin and his diplomacy chief Sergei Lavrov.