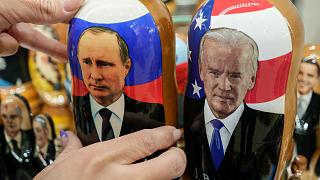 Russia's continued troop reinforcements near Ukraine do not mean, ipso facto, that Russia intends to attack and/or invade and/or occupy Ukraine. They have been there; and NOT done that.

Memories are short, but the Russians strengthened their forces opposite Ukraine last spring and succeeded in getting President Joe Biden's full attention. Ukrainian President Volodymyr Zelensky, egged on by the crazies in Washington, had been threatening to "liberate" areas in Donetsk and Lugansk controlled by anti-coup regime, pro-Russian forces, and had also been asserting the right to take back Crimea.

On April 13, Biden suddenly telephoned Putin; the White House explained that Biden expressed concern over the Russian military buildup near Ukraine and called on Putin "to de-escalate tensions." Then, in a surprise move (and in an oh-by-the-way vein), Biden suggested a bilateral "summit meeting in a third country in the coming months to discuss the full range of issues facing the United States and Russia."

That same day, Russian Defense Minister Sergey Shoigu announced that over the preceding three weeks Moscow had sent two armies and three airborne formations to western regions "as a response to the alliance's [NATO's] military activities threatening Russia." NATO had been increasing the number of its own troops and maneuvers from the Baltic to the Black Sea.