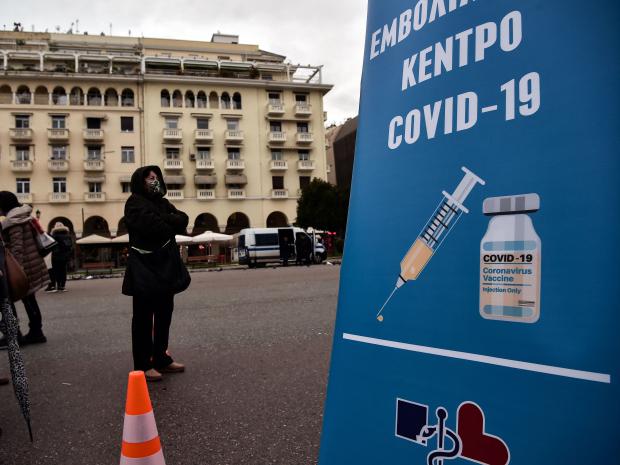 He cited the national "vigilance" now required as the new omicron variant has emerged, and also lamented the huge numbers of still unvaccinated elderly in the country. But more shocking is the penalty unveiled for not being in compliance, which will take effect starting next year. The prime minister said that for every month citizens 60-years and up go without a coronavirus vaccine, they will be slapped with a 100-euro ($114) fine.

In Orwellian fashion Mitsotakis said "It is not a punishment," but instead, "I would say it is a health fee." He said that to avoid the fine, "Greeks over the age of 60... must book their appointment for a first jab by January 16," according to his statement to the cabinet.

He underscored of the demographic, "Their vaccination is henceforth compulsory." Lawmakers will likely approve it after a parliamentary vote, given officials have lately sounded the alarm over the overstrained health system, also as data shows over a half-million people over 60 remain unvaccinated. Greece's overall vaccination rate stands at about 63%.

Over the course of the pandemic, more than 18,000 Greek citizens have died due to Covid-19.  Mitsotakis cited the rising numbers while saying the new mandate "tortured" him, but he still felt a "heavy responsibility in standing next to those most vulnerable, even if it might fleetingly displease them".

The fine, which over the course of a full year would tally to a hefty 1,200-euros, is seen as particularly steep for the over-60 population. As Forbes noted, citing Greek media figures:

The fine would represent a "hefty chunk" of the average monthly pension payment, which is about €730 ($830), the outlet reported.

PM Mitsotakis said further in the prepared statements Tuesday: "Unfortunately, of the 580,000 unvaccinated of our fellow citizens over the age of 60, only 60,000 set up appointments to get vaccinated in November." He added, "But it is mainly people over 60 who require hospital treatment and sadly lose their life. These deaths are unnecessary."