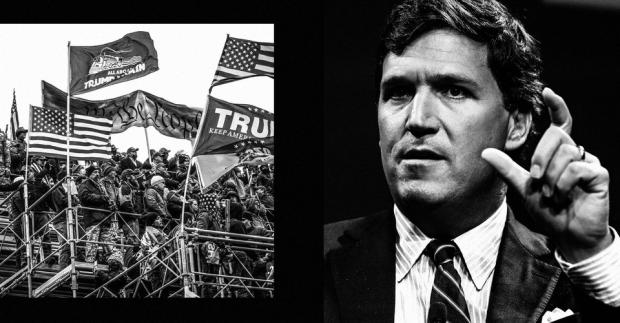 According to a report from NPR, senior FOX News figures Bret Baier and Chris Wallace raised their objections to the three-part documentary series to network leaders, including FOX News Media CEO Suzanne Scott and president of the network's news division, Jay Wallace.

Their complaints about the show's dubious claims eventually made their way up to Lachlan Murdoch, the chairman and CEO of FOX Corporation.

But network executives still allowed Carlson's three-part documentary series accusing President Joe Biden of setting up the January 6 riots in order to 'conduct an ideological purge and persecute conservatives' to air earlier this month - even as some FOX News hosts debunked its claims.

The network's decision to broadcast the documentary led to the resignations of two of its longtime contributors, Steve Hayes and Jonah Goldberg, who lambasted the series as 'an alternative history of January 6, contradicted not just by common sense, not just by the testimony and on-the-record statements of many participants, but by the reporting of the news division of Fox News itself.'

In his three-part 'false flag' series, Carlson tries to paint the hundreds of Trump supporters who descended on the Capitol on January 6 as 'patriots' fighting for their country - while also positing that the riots were set up by the left to provide an excuse for arresting conservatives.

In the first episode of his Patriot Purge, Carlson claims the government has 'begun to fight a new enemy in a new war on terror.

The Truth About That Army Drill Battling with American "Freedom Fighters"

If only our Covid healthcare was as good as El Salvador

The Jetson One: A personal flying vehicle just for having fun – WOW! I want one!

Is it Time for Intellectuals to Talk About God?

The Fauci Wing of the Libertarian Party

A Great Opportunity to Restore the Republic

'Once in a THOUSAND years explosion':