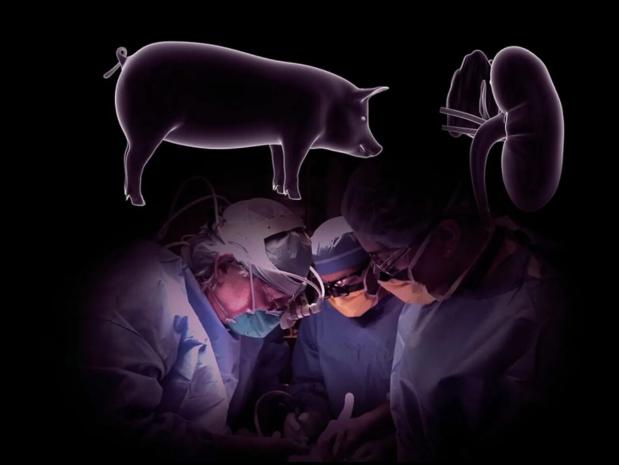 Although many questions remain to be answered about the long-term consequences of the transplant, which involved a brain-dead patient followed only for 54 hours, experts in the field said the procedure represented a milestone.

"We need to know more about the longevity of the organ," said Dr. Dorry Segev, professor of transplant surgery at Johns Hopkins School of Medicine who was not involved in the research. Nevertheless, he said: "This is a huge breakthrough. It's a big, big deal."

Researchers have long sought to grow organs in pigs suitable for transplantation into humans. A steady stream of organs — which could eventually include hearts, lungs and livers — would offer a lifeline to the more than 100,000 Americans currently on transplant waiting lists, including the 90,240 who need a kidney. Twelve people on the waiting lists die each day.

An even larger number of Americans with kidney failure — more than a half million — depend on grueling dialysis treatments to survive. In large part because of the scarcity of human organs, the vast majority of dialysis patients do not qualify for transplants, which are reserved for those most likely to thrive after the procedure.

The surgery, carried out at N.Y.U. Langone Health, was first reported by USA Today on Tuesday. The research has not yet been peer-reviewed nor published in a medical journal.

The transplanted kidney was obtained from a pig genetically engineered to grow an organ unlikely to be rejected by the human body. In a close approximation of an actual transplant procedure, the kidney was attached to a person who had suffered brain death and was maintained on a ventilator.