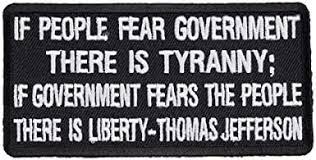 Tyrants are alive and well during these Covid days. If you tremble with righteous anger when tyrants raise a clenched fist to crush the innocent and helpless, then you and I can become friends, even if you're a Liberal.

Yes, I'm getting mellow at my advanced age. But then, mellow is only one stage from being rotten, so we can at least be friendly.

Righteous anger is producing stirrings of courage, convictions, and commitment around the globe.

A few days ago, thousands of physicians told national governments they are resisting their totalitarianism and will not take it anymore. They declared government officials are not in charge of health care, and in attempting to control it, they are tyrants and totalitarians. Such officials would also be ordinary thugs.

It was September 29 of this year that more than 6700 physicians threw down the gauntlet and demanded an end to the medical tyranny that national and international health officials had forced upon them. The concerned physicians are weary of being bullied, browbeaten, and bludgeoned by political physicians and restricted on how they treat COVID-19 patients before they are hospitalized in a life and death position. Often the mandatory unsuccessful treatment fails, ending with death.

I think death would indicate the treatment was unsuccessful.

Free Speech - The Time to stand up is NOW

Elon Musk Is Selling Tesla Shares, But Buying More Than He Sells

CIA Protected PEDOPHILES?! Why Am I Not Surprised | Louder with Crowder

Myocarditis, clots, may be caused by sloppy injections straight into a vein