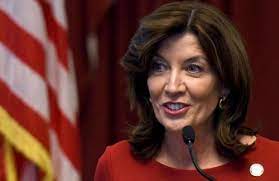 During a press briefing with reporters in Rochester Wednesday, Hochul told a group of reporters that she hoped all unvaccinated workers would meet Monday's deadline to get the jab, or lose their jobs.

For those who continue to resist - including nearly 20% of the state's hospital and nursing-home workers - they will be replaced. Possibly by foreign workers.

Faced with this, it makes sense to wonder how NY State, which has no immigration-related authority, could even credibly make such a threat? But Hochul says there have been conversations with the Department of State (albeit on a "limited basis") about the possibility of doling out emergency visas to foreign workers.

"To those who won't, we'll be replacing people. And I have a plan that's going to be announced very shortly," she said.

"We've identified a whole range of opportunities we have to help supplement them."

Hochul said state officials were "working closely with various hospital systems to find out where we can get other individuals to come in and supplement places like nursing homes."

"We're also reaching out to the Department of State to find out about visas for foreign workers, on a limited basis, to bring more nurses over here," she said.