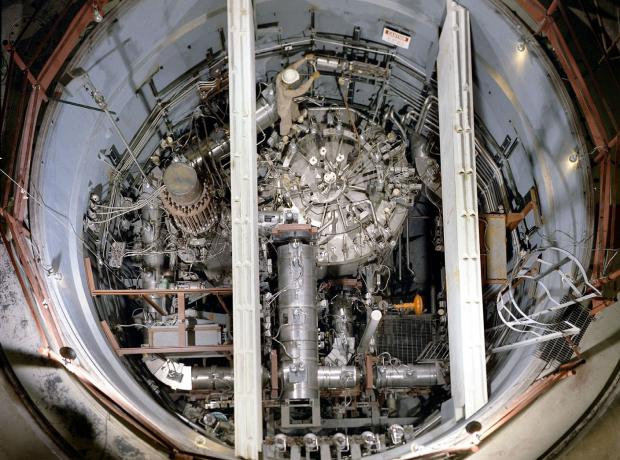 Construction work on the TMSR is due to finish in August and a test run of equipment could start as early as September.

Molten salt and thorium reactors are inherently safer and can have less nuclear waste (aka unused nuclear fuel.) Nuclear fuel is unused because even number isotopes are harder to split or react. Fast reactors have neutrons moving at higher speeds (one hundred times faster) needed to cause unraium 238 to react into plutonium.

Oak Ridge National Laboratory (ORNL) in the United States operated an experimental 7.34 MW (th) MSR from 1965 to 1969, in a trial known as the Molten-Salt Reactor Experiment (MSRE). This demonstrated the feasibility of liquid-fuelled reactors cooled by molten salts.

China has been developing waterless nuclear reactors. Construction work on the first commercial molten salt reactor should be completed by 2030. This will allow the construction of such nuclear reactors even in desert regions and in the plains of central and western China. The molten salt reactor will be powered by liquid thorium instead of uranium.

SINAP has two streams of TMSR development – solid fuel (TRISO in pebbles or prisms/blocks) with once-through fuel cycle, and liquid fuel (dissolved in fluoride coolant) with reprocessing and recycle. A third stream of fast reactors to consume actinides from LWRs is planned. The aim is to develop both the thorium fuel cycle and non-electrical applications in a 20-30 year timeframe.

*The TMSR-SF stream has only partial utilization of thorium, relying on some breeding as with U-238, and needing fissile uranium input as well. It is optimized for high-temperature based hybrid nuclear energy applications. SINAP aimed at a 2 MW pilot plant initially, though this has been superseded by a simulator (TMSR-SF0). A 100 MWt demonstration pebble bed plant (TMSR-SF2) with open fuel cycle is planned by about 2025. TRISO particles will be with both low-enriched uranium and thorium, separately.
* The TMSR-LF stream claims full closed Th-U fuel cycle with breeding of U-233 and much better sustainability with thorium but greater technical difficulty. It is optimized for utilization of thorium with electrometallurgical pyroprocessing.