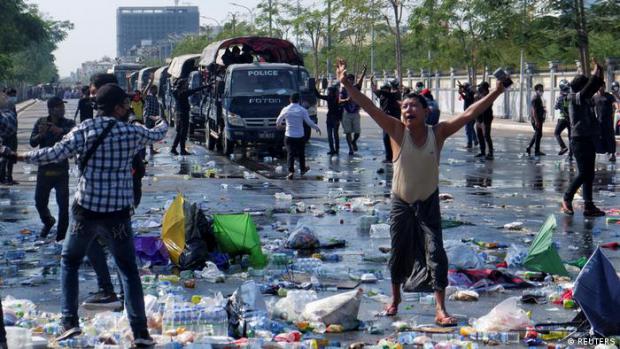 Eighteen have been reported killed Sunday in clashes with police and armed troops, which have over the past week increasingly resorted to 'live fire' to disperse 'banned' demonstrations. "Myanmar police fired on protesters around the country on Sunday in the bloodiest day of weeks of demonstrations against a military coup and at least 18 people were killed, the U.N. human rights office said," according to Reuters.

Over the past two weeks anti-coup protests have grown increasingly large and visible despite the large army presence - including armored vehicles and armed troops on city streets - and despite a near month-long communications and internet lockdown of the country.

The United Nations human rights office in a statement condemned the use of lethal force, saying, "Police and military forces have confronted peaceful demonstrations, using lethal force and less-than-lethal force that – according to credible information received by the UN Human Rights Office – has left at least 18 people dead and over 30 wounded."

Rubber bullets, tear gas, and stun grenades have also been used to quell protests, but over the last week social media videos that made it past the junta's attempts to impose a firewall on the country have increasingly appeared to show live ammo being used, with victims suffering gunshot wounds to the chest, head, and legs.

Reuters documented some of the deaths Sunday as follows:

Among at least five killed in Yangon was internet network engineer Nyi Nyi Aung Htet Naing, who a day earlier had posted on Facebook about his concern at the growing crackdown, medics said.

The footage revealed police cannot shoot the gun properly and a soldier was guiding him and others were happy to do so. It was uploaded by Dawei,Southern Myanmar local news page and says 4 were murdered in the protest#WhatsHappeningInMyanmar#OpCCP #MilkTeaAlliance #Feb28Coup pic.twitter.com/FvyAV7JuWG