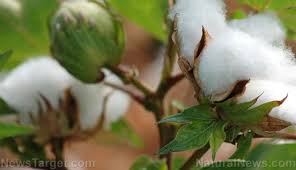 (Natural News) The FDA has approved a new protein-packed source of food for human consumption that tastes like chickpeas, but that doesn't mean you should be lining up to buy it.

The new food is genetically modified cottonseed, and proponents are claiming it could solve world hunger – a pretty typical empty promise that has been made about many GMO foods before it, yet world hunger persists.

Cotton plants and their seeds normally contain a toxic organic compound called gossypol, which can damage human red blood cells, causing anemia and death in people who consume it. It can also cause irreversible infertility in men, which has even led to it being explored as a potential male contraceptive.

The seeds are used for cattle and sheep feed as animals with multiple stomach chambers can safely eat them.

Recently, a group of researchers at Texas A&M University genetically engineered a variety of cotton known as TAM66274 that does not contain gossypol, which they say makes the seeds safe to eat. The compound can still be found in the rest of the plant to help it retain its natural protection against pests and disease. The new variety can also still produce cotton fiber normally.

Corruption and Criminality at Leadership Level of the WHO - Part III

Elon Musk - Education does not work