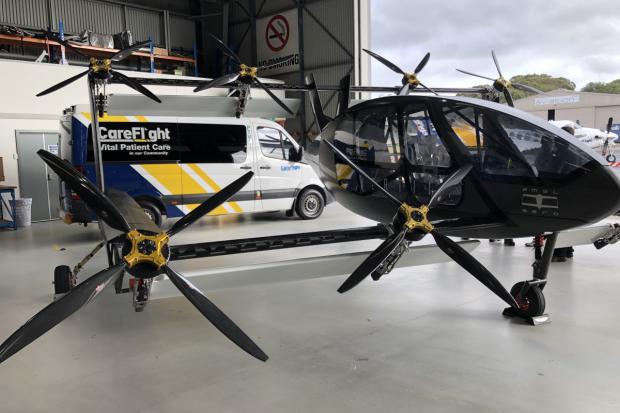 The Vertiia has been developed in conjunction with the University of Sydney and autonomy and sensor specialists Mission Systems. It's a transitioning multirotor, with eight large props mounted on two wide carbon fiber poles extending from the upper tail and lower front of a slim, pod-shaped cabin. These props have the ability to tilt from pointing vertically upward for takeoff, hover and landing, to fully horizontal in cruise flight. Having eight of them provides a decent level of redundancy in case something fails.

Small wings are attached to the backsides of the props, tilting in unison with the props so they don't block airflow, and once a certain speed is reached, this box wing configuration will allow efficient winged flight. AMSL says the aircraft is rated to cruise at around 300 km/h (186 mph) and it'll be piloted on debut, but will have autonomous capabilities built in, ready to come online when such things become legal.

The company is making a big call, saying this will be "the most efficient eVTOL in the world," perhaps due to its small, slim, tandem two- or three-seat cabin and lightweight carbon fiber architecture. We're interested to learn more about this claim, and where else the Vertiia design team has managed to find efficiencies others have missed.

Range will differ depending on energy storage options; AMSL is working on figures around 250 km (155 miles) for a battery-powered version that'll require long charges between flights, and 800 km (500 miles) on a hydrogen powertrain, which will also enable quick refueling anywhere you can get a hydrogen pump installed. The latter, at this stage, is still unproven technology, but once it's up and running it should be a no-brainer for the entire eVTOL segment.