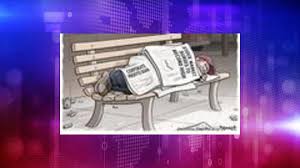 By mid-afternoon, hours after the DJIA soared to new highs, Bloomberg tweeted a disturbing video of yet, another massive food bank line, something we've been highlighting this fall as an increasing occurrence as covid winter continues to crush the working-poor.

Today's food bank lines were situated in Albuquerque, New Mexico, where hundreds of vehicles were lined up "at a local stadium parking lot," Bloomberg said. The lines snaked around a parking lot, with an overflow of vehicles pouring out onto the city street.

On Monday, we noted that on Dec. 31, many of the key provisions in the CARES Act are set to expire if there is no action from Congress. This could be catastrophic for 12 million America who will lose access to their Emergency unemployment benefits activated in the aftermath of the covid pandemic, which alone could be a drag of up to 1.5% to growth in 1Q, according to a recent Bank of America report.