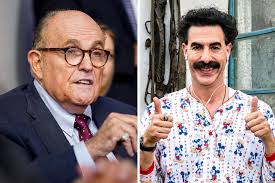 In a statement in response to the release of review clips for the film "Borat Subsequent Moviefilm" Giuliani is seen being interviewed in a Manhattan hotel room by actress Maria Bakalova, who plays Borat's daughter

Throughout the scene, Giuliani, 76, and Bakalova both touch hands, and at one point, the actress puts her hand on his knee. When the fake interview is finished, Bakalova says, "Shall we have a drink in the bedroom?"

The two head to the bedroom, and the former New York mayor and current lawyer of President Trump, says, "Here you go, my dear," as he appears to help the actress remove her microphone.

Bakalova asks "Should we slip [sic] your jacket?", and helps him remove the wireless microphone from underneath his shirt, untucking it. He lies back, and puts his hand down his pants seemingly to tuck his shirt back in, keeping his jacket on.