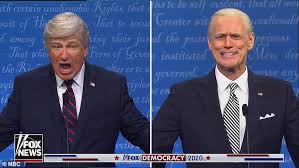 Trump's 'Nodding Lady' and voter who complimented him on his smile were skewered, as was his refusal to answer questions

Biden's meandering answers to voter questions were mocked as he was turned into Bob Ross and Mr. Rogers

The cold open was set up as if viewers were channel surfing between the two programs.

During the recreated Trump Town Hall, the president, played by Alec Baldwin, went head-to-head with Kate McKinnon's Savannah Guthrie, avoiding her direct questions about when he last tested negative for coronavirus and any symptoms he might be experiencing.