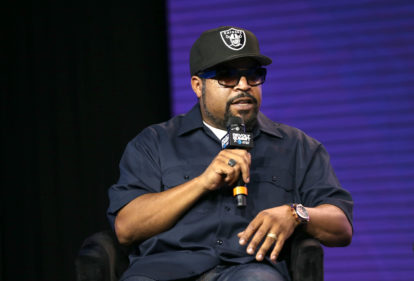 Ice Cube was branded a 'sell-out' and 'hypocrite' on social media on Wednesday night, after it was revealed the rapper has been working with President Trump to help craft his 'Platinum Plan' for black Americans.

The controversy was first stirred after Trump's campaign adviser Katrina Pierson gave him a 'shoutout for his willingness to step up and work with [the Trump] administration' on Twitter.

Although news of the unexpected collaboration was not a direct endorsement for Trump, Ice Cube, 51, has faced a swell of backlash in the hours since from shocked and confused fans who are asking 'how do you go from NWA to MAGA?'

Author Roxane Gay tweeted the same question, and also asked 'Good lord … how much are they paying Ice Cube?'

Another user lambasted The Boyz in da Hood for allowing himself to become a pawn in Trump's apparent bid to 'buy the black vote'.

'I think it's sad that we as BLACKS can see what this man has done to divide this country and to destroy the black race for years!!!,' the user wrote. 'He is only reaching out for a platinum plan to try to BUY the black vote. My vote is not for sale. My ice cube just melted!!!! Boy bye'.