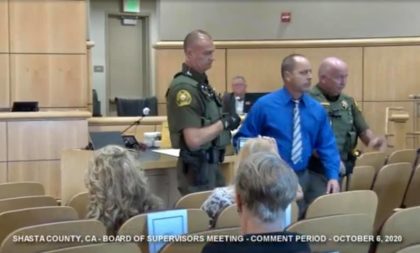 Richard Gallardo breaks the news to supervisors and county council: "You're under arrest." Photo by Doni Chamberlain

Yesterday was my first time to observe an in-person citizen's arrest, something I'd always associated with bold, courageous actions following a crime; a special-situation tool implemented only in case of an emergency, when authentic law enforcement officers were needed, but unavailable. Scenarios could include a good Samaritan apprehending a drunk driver in a hit-and-run situation, or a brave citizen intervening during an assault, or during a purse-snatching, or an attempted kidnapping. Things like that.

But no, the citizen's arrest I'm talking about did not remotely resemble any of those scenarios. Rather, it happened in the middle of the public comment period at a Shasta County Board of Supervisors meeting.

Tuesday, the trouble started when Richard Gallardo – no stranger to showing up and expressing his anger during BOS meetings — announced during his public comment that he was placing the entire board, as well as County Counsel Rubin Cruse, under citizen's arrest that very moment for alleged multiple Brown Act violations.

Supervisor Steve Morgan missed out on the surprise as he was absent due to illness, a condition that at least three of the supervisors and one lawyer may have momentarily envied.

"We will catch up with him later," Gallardo said of Morgan.

It was surreal. Gallardo, a former representative of the Shasta County Gun Owners (a Chapter of California Rifle and Pistol Association), stood behind the lectern and loudly declared that the supervisors and county council were all under arrest. I don't know what he expected; if he thought the supervisors and county council, after hearing his words, would obediently leap from the dais and put their hands behind their backs, ready for handcuffs, or what.

Gallardo demanded the clock be stopped so he could proceed. The clock did not stop. Ding! His time was up, and when he refused to budge, a pair of Shasta County bailiffs appeared at his side to escort him from the chambers.

Is This Virus the Weapon Being Used to Usher in a Communistic Takeover of the United States?

For The First Time, Wall Street Admits That "Civil Unrest" Could Crash Markets